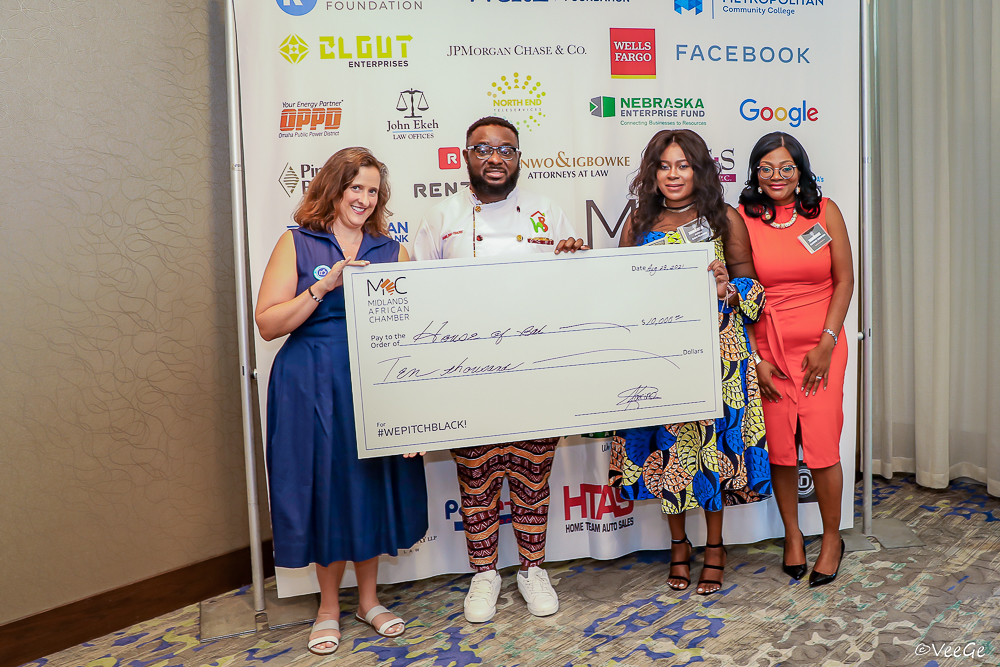 The Midlands African Chamber’s Pitch Black Grand Finale Event was held in Omaha on Aug. 28, 2021. More than 200 people gathered at the Hilton Garden Inn at Aksarben Village, 6737 Frances St. to watch as five local businesses competed for a chance to win up to $30,000 in business funding and prizes.

Pitch Black is a business pitch competition similar to the popular ABC TV-show the “Shark Tank” – only the businesses were homegrown and Black-owned.

The contestants — a chef, a child learning center, holistic candle makers, an immigrant resource center, and security company — had survived three juried rounds of 5-10 minute elevator pitches already. They were the top-achieving business owners who secured an opportunity to present their business ideas making it past rounds that dozens of other applicants didn’t.

The Midlands African Chamber, Inc. – which was formed during the Covid-19 Pandemic – hosted the inaugural event and is totally rewriting the rules of business success with its Pitch Black Competition. Over the past few months not only did the Midlands African Chamber raise money and support to host Pitch Black with the help of generous sponsors and community leaders, President Karine Sokpoh said it also assisted in the business development and promotions of the contestants it honored at its grand finale event.

The grand prize first place winner received $10,000; second place $5,000; third place $2,500 and fourth and fifth took $1,000 home each. Big name sponsors, such as the Ewing Marion Kauffman Foundation and the Weitz Family Foundation generously provided the cash prizes that were awarded to all of the finalists.

Keynote speakers featured Samuel Baddoo, a Ghanaian immigrant who founded Fleri, a cross-border insurance marketplace focused on immigrants who need a way to provide quality healthcare for dependent family members in Africa. Baddoo recently won a $75,000 pitch competition similar to the Pitch Black event and shared his tips on how entrepreneurs could win big as well.

Chicagoans Fred and Perteet Spencer bring West African cuisine into people’s homes through “AYO Foods” a frozen food line found at Whole Foods and Kroger Stores throughout the United States. The couple wowed the crowd with their come-up story. Perteet Spencer seeks to build a more inclusive food system that is reflective of her Liberian heritage and her experience in the food industry. AYO Foods sources local ingredients as well as from West Africa and South America in the production of their frozen goods.

Back to the contestants, all had given their spiel on why the judges should invest in their business ideas. And, after much deliberation, peppered with a flurry of sharp-witted questions, winners were selected.

Chef Jamil D. Bah-Traore, a Togolese transplant, was announced the $10,000 grand prize winner. He is the creator of House of Bah – an Afro-fusion catering business that uses locally sourced fruits, vegetables and other ingredients. He earned his culinary arts degree from Metropolitan Community College and decided to pay homage on stage to all those who molded him into the chef he is today.

Second place winners were Shereece Dendy-Sanders and Kalisha Reed of Islasimone Candles who secured $5,000. Dendy-Sanders’ hobby of candle making led to the co-creation of a luxury candle company brand in which the businesswomen hope to leave as a legacy business for their daughters.

Third lace winners were Dr. Danita Webb and Beverly Tate of Gifted Minds Learning Center who left with $2,500 investment. The educators want to create a state-of-the-art facility in which gives children from all backgrounds an opportunity to grow their social and emotional skills in a healthy, educational environment.

Owners Tony and Danesha Cannon of One Security Solutions, placed fifth and also secured $1,000 for the couple’s security surveillance company.

Applications for the 2022 Pitch Black session will open October 1, 2021. More details can be found at www.midlandsafricanchamber.com

Dr. Ope Banwo [Attorney, Pastor, Businessman And Techpreneur] The Restless Pioneer Who Loves To Zag When Everybody Is Zigging

Meet the Cameroonian Immigrant & Entrepreneur Partnering with Corporations in the U.S. to Bring Access to Clean Drinking Water to Communities in Sub-Saharan Africa